Awhile back I was making my way through Dare to Lead by Dr. Brene’ Brown, and stumbled upon this quote which left me intrigued.

I appreciate the use of the word Thrive.  First it reinforces the idea of a wide spectrum of performance when it comes to leadership.  Second is that if there are gradients of performance then that also means it is complex.  Each of those are affirming to the notion that leadership should be respected.  It doesn’t say live, survive, complete, etc.  It says that in order to prosper or flourish as a leader you must be able to operate with ambiguity.  So lets talk about that. 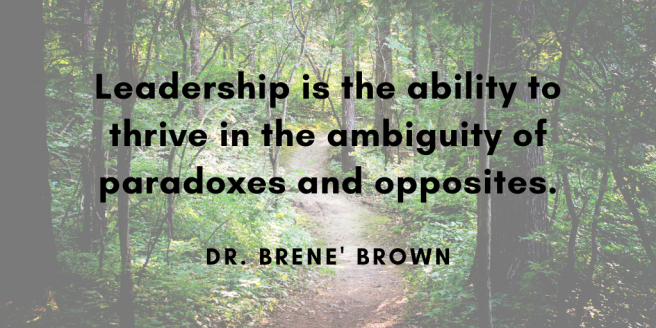 I am drawn to the idea of Ambiguity being the same as inexactness.  And the gray is where we often attribute the idea of being open to more than one interpretation.  So much of what we do as leaders lies in the contrary.  I understand the discomfort with not always knowing when so much is at stake.  I get that it is hard and challenging, and you may not understand for a long time whether your choice was the best one.  That small undefined area, that sliver of mystery, is where the strongest leaders have the chance to emerge.  To thrive.

So often when we are thrust in to the role of being a leader the immediate goal is to appear proficient.  We want to be able to answer each question, address each concern, and keep everything moving forward.  A new leader can survive making decisions early on – many of them likely simple and black/white.  And maybe even the gray ones seem easy enough as most people being supervised will be polite and offer the benefit of the doubt.  However, some leaders linger in that space, they get comfortable.  However I don’t think you can thrive – prosper – flourish – if you don’t dig deeper in to that gray area.  It’s hard.  Yet the gray area is where risks are taken, lessons are learned, and better ideas emerge.  If you aren’t willing to lean in to the gray area then you may never realize your potential.

I don’t know, I haven’t figured this one out yet.  It’s been rolling around in my head for some time.  What do you make of this descriptor for leadership?  How do you wrestle with the unknown?

4 thoughts on “Living in the Gray”