I recently shared on Twitter an article that came to me from Runners World.  The title spoke about how competitive runner Molly Huddle handles a bad race or workout (Click here for the article)   She explains that when she was with two other famous runners in an elementary school, the kids kept asking questions about failure.  This surprised her, and admittedly, probably would have surprised me.  However as I was running this morning, I thought about this very idea.  Kids were focused on what could be learned from failure.  At that young age, they understood that it’s what can be taken from adversity or failure or a bad experience that might matter most.  They get it.  Maybe they don’t have the words to articulate what they are exploring, but they were seeking ideas for how to handle it.  And when they face it, they may be a bit more equipped to respond.

And this now begs the question – where does that approach go as they get older? And how can we bring it back? 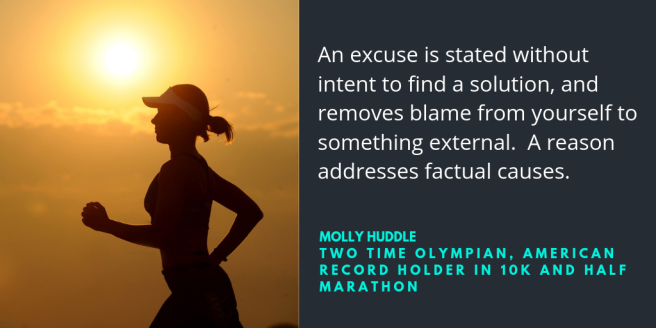 Later she contrasts excuses vs reasons and I found this compelling for educators.  Too often I think we offer, or at least entertain, excuses because that is often the path of least resistance.  It’s always easier to look for a culprit rather then to look for a path forward. The students she spoke with seemed to understand that stuff happens.  And when you opt to ask questions then you can reflect.  And when you commit to reflect you find a solution or a next step. It is the act of choosing – making a decision – that matters.

Which of your most recent mistakes did you choose to learn from?  Did you start that process alone or with someone else?  Which of those two options works best for you?

One thought on “Leveraging Mistakes at Any Age”